The national picture and a look ahead for London

Brexit? Boris? Corbyn? As the exit poll came through at 10pm, the inquiry quickly began as to why the Conservatives were set to win their biggest majority since 1987 and Labour was heading to its worst election result since 1935. 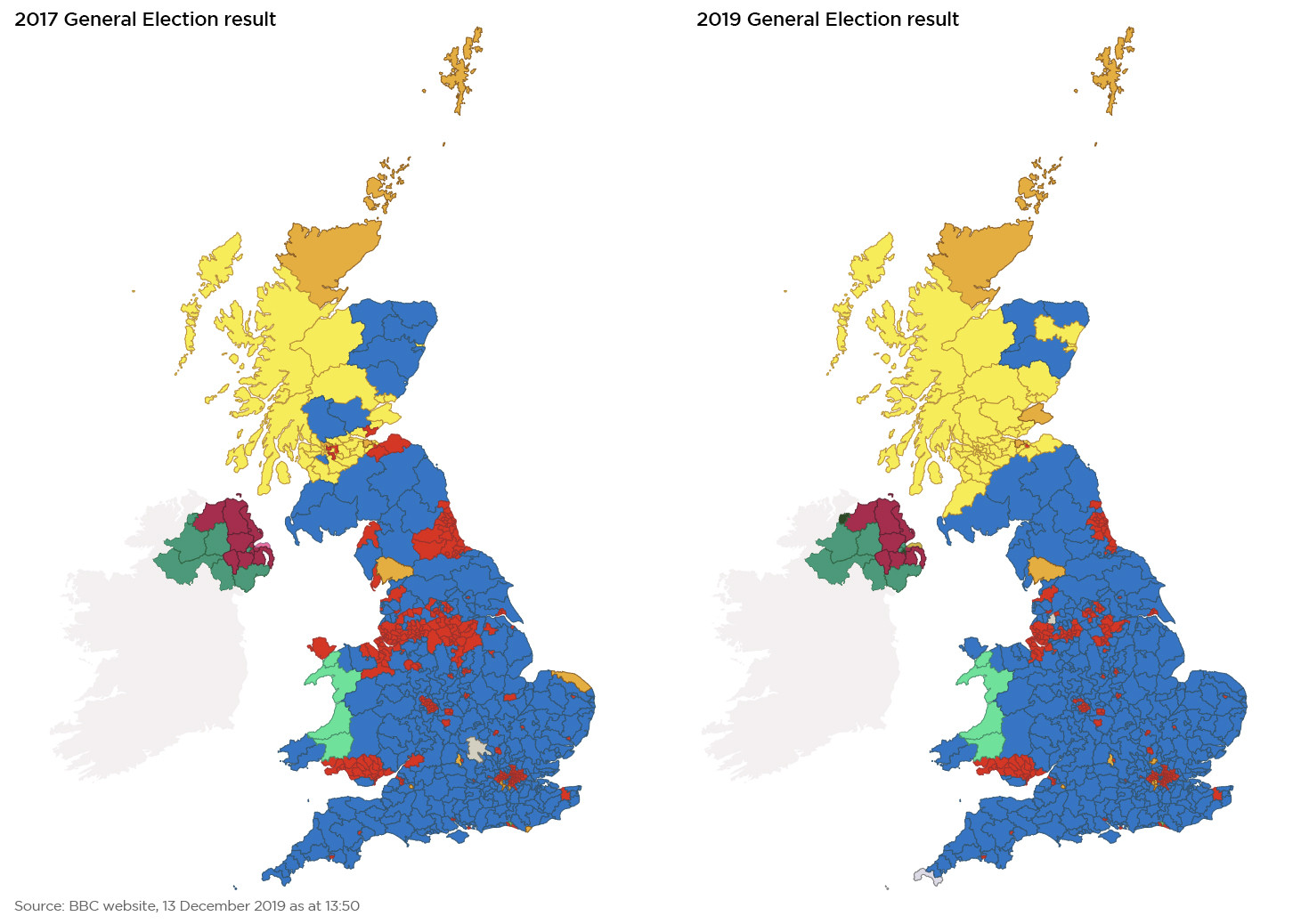 As the results rolled in it was clear that Labour’s red wall in the north of England had been breached. Bishop Auckland, Great Grimsby and Workington all turned blue, places that had returned a Labour MP for every election since the 1930s.

The trend became clear in the early hours of Friday; northern and Midlands towns that overwhelmingly voted Leave in 2016 were switching to the Conservatives.  Leave areas of Wales also turned out for the Tories with six gains from Labour and the party successfully defended every one of its West Country seats from the Lib Dems.

But Labour also saw its vote share fall in strong Remain areas. The party clung on to most of its city seats across Birmingham, Bristol and Manchester and student areas in Canterbury and Norwich, but the top targets of Hastings and Rye, Norfolk North and Southampton Itchen all stayed resolutely blue and the party only gained one new seat, here in London: Putney.

The Lib Dems’ hopes of a comeback failed to materialise anywhere in the country, despite an overall increase of 4.2% in the vote share.  The party won just one more seat than 2017, none of the ‘big beast’ Tory and Labour defectors came close to winning and there was the final indignity of seeing their leader Jo Swinson lose her East Dunbartonshire seat.

The Greens held their one seat in Brighton Pavilion, whilst the Brexit Party had a showing in the north and Midlands but were some way off taking any seats.

Meanwhile, in Scotland it was a very different picture with the SNP winning 48 of the 59 seats. The party took a significant number of votes from all three of the main parties, bringing the question of a second Scottish independence referendum firmly back into focus. The future of the union issue will have also been heightened by the success of nationalists and republicans in Northern Ireland, at the expense of the unionist parties.

As the dust settles on these results (see detailed table below), the speculation has already begun as to the direction of Boris Johnson’s Conservative majority government and the future of the Labour party. Apart from ‘getting Brexit done’, how will the Tories respond to representing working class northern seats? And what will the PM do to try and bridge the huge divides between these areas and Remain-voting, small “l” liberal cities?  And for Labour, the leader has said he will not lead another election campaign and the question is now whether this result spells the beginning of the end for Corbynism and Momentum? And by extension, how will party address its desperate performance in so many places that it had previously counted on?

The national results, in numbers 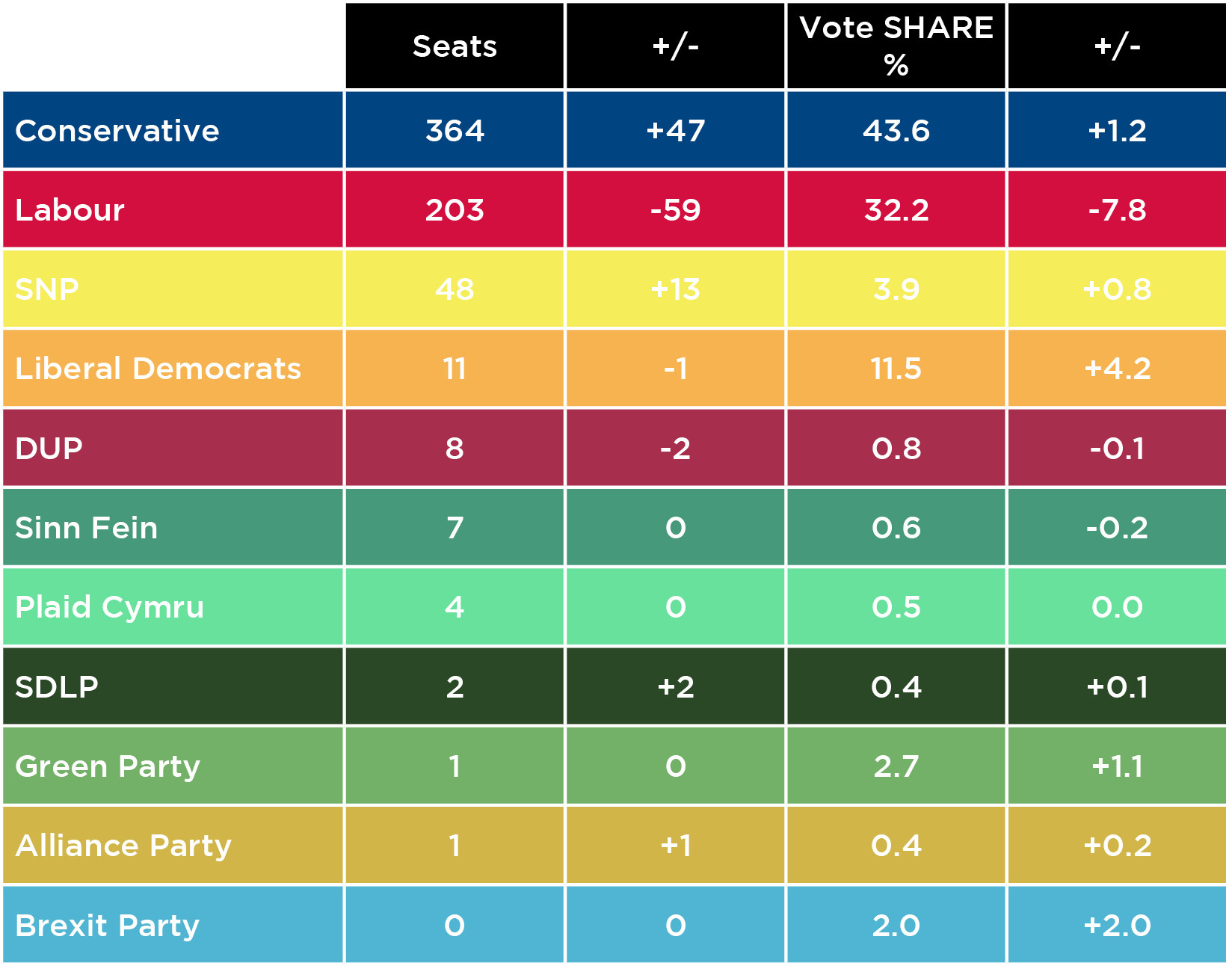 So what now for capital and country?

The Conservatives’ best result since the 1980s gives them a very strong mandate on Brexit and much more.  We know the Chancellor, Sajid Javid, retains his job and now all eyes will be on the rest of the Cabinet and what changes the empowered Prime Minister makes.  Labour’s only election highpoint geographically was again in London, where they won Putney, but lost Kensington and held all their other seats.  That might comfort Sadiq Khan as he prepares for the 7 May 2020 GLA elections, but what will it mean for government commitment to the capital?

Boris Johnson’s gamble paid off – in spades – and the Conservatives now have a very strong working majority.

As we discussed at our pre-election presentations and in recent issues of LDN, London proved to be the least interesting part of the country – the numbers here remain as they were in 2017 albeit with four seats changing hands – on a night when all eyes were on the north, Midlands and Scotland.  In our separate blog on the capital we consider the changes (or lack of them) and the implications for the May 2020 Mayoral race.

In terms of wider implications for London, one of the 15 new MPs is Nickie Aiken, current leader of Westminster City Council, who held the Cities of London and Westminster seat for the Conservatives – which is expected, in due course, to trigger a leadership election at Westminster City Council.  Meanwhile, as anticipated, Ealing North elected James Murray as its new Labour MP, so a new Deputy Mayor for Housing at City Hall will be needed – although for now Jules Pipe is handling both this and his main briefs for planning, regeneration and skills.

Looking ahead, the Prime Minister made clear that much trust has been placed in him and his party, particularly by those they have newly won over in the North and Midlands.  What this means for London, and particularly central government investment in the capital over the next five years, remains to be seen.

Meanwhile, what is Sadiq Khan feeling this morning?  Mixed emotions we suspect.   His party still holds 49 seats (the parties’ London share of vote is still to be analysed comprehensively though) and London remains a Labour town. Neither the Lib Dems or Tories appear to have gained any obvious momentum for May 2020.  And Rory Stewart?  Well, not one of the Independents running in London won a seat.  So for now, Sadiq winning next May in the Mayoral election still seems the likeliest scenario; his position on Brexit and vis-à-vis the newly emboldened Conservative Government in general, will be key. He, much like his predecessor, thrives in campaign mode so an opposition government may even be an advantage for the former boxer electorally speaking, though not necessarily in terms of securing government support for his policy agenda.

And assuming the Tories go a more or less full term this time, then we could see the next general election on the same day as the next Mayoral elections, in May 2024; even if, as many suspect, Sadiq likes the idea of moving straight out of City Hall into Number 10, the fortunes of his own party make that a tricky one to call right now.