Has Labour peaked in London? As the final results are declared here in London all three main parties can justifiably say that they did ‘OK’, but there has been no major political earthquake to speak of.

Has Labour Peaked in London?

For us this title sums up the local election results we have witnessed today.

As the final results are declared here in London – barring Tower Hamlets, which as of 7:30pm has not yet declared – all three main parties can justifiably say that they did ‘OK’, but there has been no major political earthquake to speak of.

The order of OK-ness probably being:

1.  The Lib Dems (3), who held on in Sutton (but lost 12 seats to the Tories there), won Richmond and Kingston convincingly, taking them back to 2006 when they last ran all three of these councils at the same time. However they made few inroads in other parts of the capital and are at the moment only 33 seats up from a very low base of 116 at the last elections in 2014. And remember back in 2006 they also ran Brent, Camden and Southwark in Lib Dem/Con coalitions and even controlled Corbyn’s Islington. They still have little presence across these Boroughs despite significant campaigning efforts in their old strongholds, although the Party made some gains in Haringey and Merton

2.  The Conservatives (7) saw off Labour in their totemic boroughs of Barnet, K&C, Wandsworth and Westminster. In Hillingdon and Barnet they actually increased their majorities, which took even their most ardent supporters by surprise. With Bromley and Bexley also holding, they control seven councils, down two but importantly both lost to the Lib Dems and not to Labour. The Tories can justifiably say that what cracks there were have not led to major fault lines, but they continued their trend of losing council seats across much of London.

3.  Labour (20 – with Tower Hamlets undeclared). Without Tower Hamlets, they would, in effect end up where they were earlier in the week. They increased their total number of councillors to above their 2014 tally of 1,060, making it their second best result since 1971. But the gains tended to be in Labour run councils like Brent, Croydon, Ealing, Enfield, H&F, Redbridge and Waltham Forest (Labour got their highest ever number of councillors in all these boroughs). Some will say they failed to manage expectations, others do believe they genuinely thought they could win at least Barnet and probably Wandsworth too. Whilst the analysis has yet to be done, the ‘youthquake’ social media activity appears not to have cut through enough.

So in reflection of these results, we are now asking ourselves if Labour is close to having peaked in London. They are at a high water mark in terms of the number of Labour Councillors in a huge number of boroughs in London and this is the third Local Election on the trot where the Party has made significant gains.

But let’s be clear – we have had eight years of Conservative led governments. Normally the opposition would be winning by some margin in mid-term local and regional elections. Labour appears only to be strengthening their own strongholds rather than being able to reach out further. As the national polls and now the electorate have demonstrated through the ballot box, the Conservatives have more or less held their own and despite minor tremors in losing Trafford and Plymouth they have won control in the likes of Basildon and Peterborough. As we send this note out, they are down only 30 councillors in total compared to yesterday and the projected national share of vote looks like Con: 35%, Lab: 35%, LD: 16%, Other: 14%.

Statistics are vital but imagery is just as important. The sight of the Mayor of London exiting the Wandsworth count in the dark was matched by Theresa May arriving there a few hours later in the bright sunshine. And nationally, Jeremy Corbyn had to take an early train all the way to a cloudy Plymouth to find a Labour victory over the Tories worth crowing about.

Back to London, for Sadiq Khan and his advisers this will be a salutary few days.  He is yet to be confirmed as Labour’s candidate for the 2020 Mayoral election (although we believe this has been agreed but not yet announced). Despite a plus 20 point satisfaction rating, with two years to go he will be wary of a possible resurgent Conservative party, especially if they pick a candidate who can appeal beyond their core base (as Boris did in 2008). Now that would be an earthquake.

More immediately and over the coming few days we have the selection of each borough leader. Do not expect all the current leaders to be re-elected by their own parties, even if they have done well. Peter John faces a challenge in Southwark, Mo Butt in Brent too and there may be challenges in the likes of Enfield, Greenwich and Hounslow in the days ahead. The battle to be the leader of Haringey will be one to watch next week as a shift to the left continues in some boroughs.

We hope you enjoyed this post-election blog on the results (so far!). Keep an eye out for a longer, more comprehensive briefing from LCA next week, which will explore London’s new political landscape and delve more into the results at borough level. 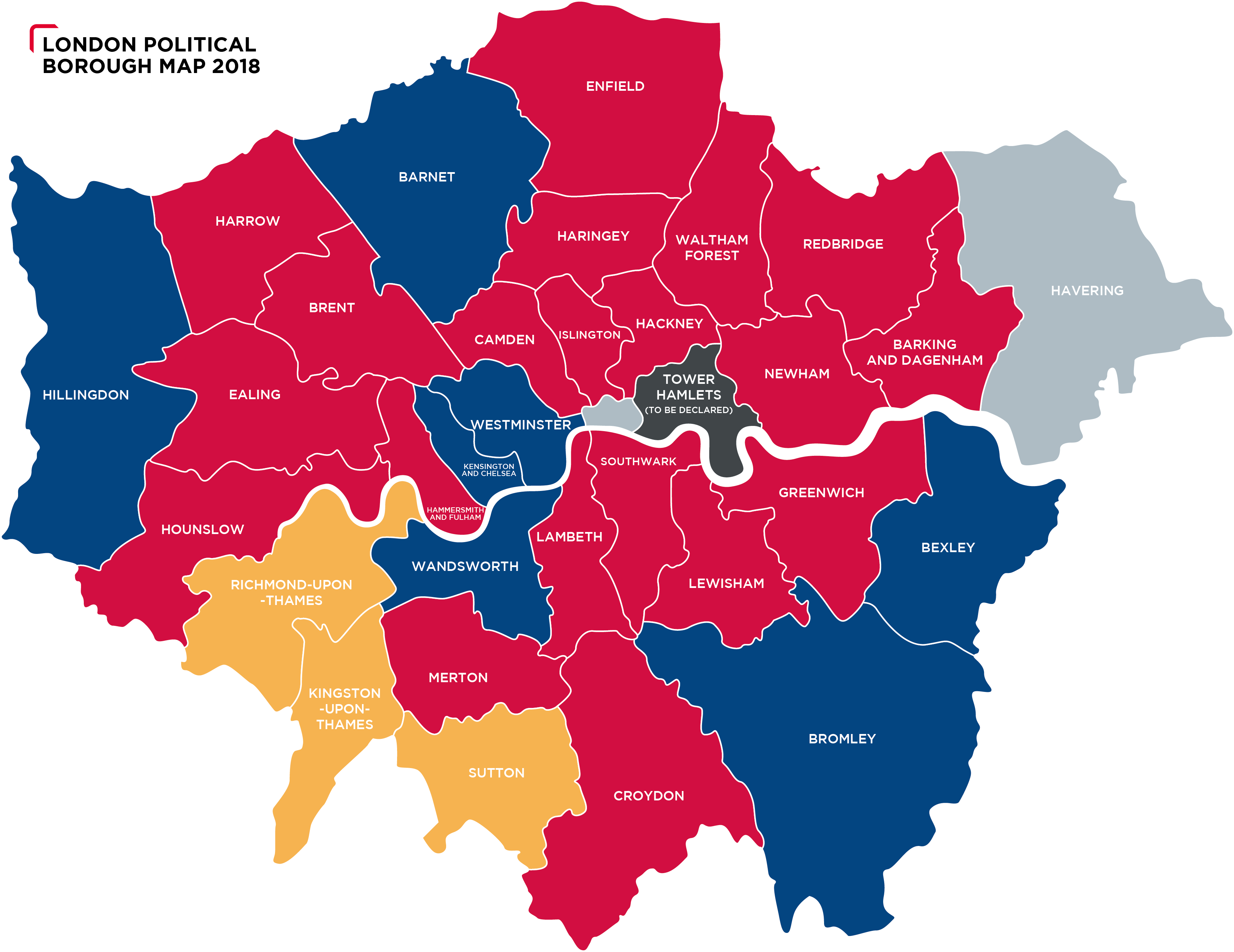 We hope you enjoyed this post-election blog on the results (so far!). Keep an eye out for a longer, more comprehensive briefing from LCA next week, which will explore London’s new political landscape and delve more into the results at borough level.