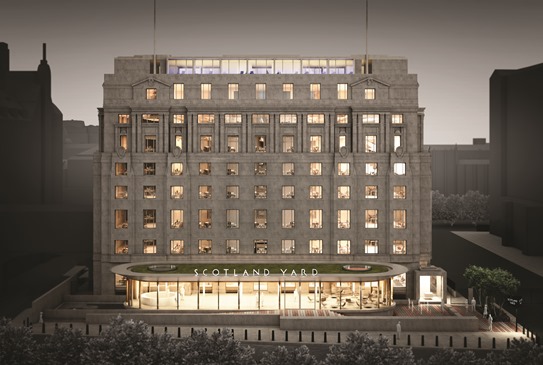 In the heart of Westminster and close to the Met’s founding location, the Curtis Green building is undergoing a refit and security upgrade and will become the new HQ at the end of next year. The move is part of the Mayor’s drive to put Bobbies first by selling off underutilised police buildings and redirecting funds into frontline police services.

As part of the biggest programme of transformation in the Met’s history, the sale of the outdated New Scotland Yard, now to be known as 10 Broadway, for £370m will help modernise and streamline London’s police service, saving money, keeping officer numbers high and equipping them with the latest technology to enable them to be more effective, more mobile and more accountable. The relocation to the slimmed down new premises on the Victoria Embankment will save an additional £6m a year in running costs. Since 2012, the Mayor’s programme has helped to cut costs across the Met by £391m.

The Curtis Green building is already owned by the Mayor’s Office for Policing And Crime and has been empty since late 2011. Once its renovation is complete, the new HQ will feature a public entrance pavilion, extensions to the building itself and the creation of public open spaces.  The world-famous revolving sign will be retained as well as the Eternal Flame and Roll of Honour which are currently located at New Scotland Yard in Victoria.

The Metropolitan Police Commissioner Sir Bernard Hogan-Howe and London’s Deputy Mayor for Policing and Crime Stephen Greenhalgh today visited the site as the project reached the tallest point of construction.

Metropolitan Police Commissioner Sir Bernard Hogan-Howe said: "Selling 10 Broadway and moving our headquarters to Curtis Green is allowing us to reinvest in our remaining estate and in the technology we need to support our officers as they fight crime and support victims. It is only with this kind of intelligent investment that we will be able to do more with less. The MPS is focused on providing a more modern, efficient, secure and cost-effective estate, ensuring we remain at the forefront of 21st century policing and getting more officers out on the streets, cutting crime, cutting costs and providing total care for Londoners.”

Deputy Mayor for Policing and Crime, Stephen Greenhalgh, said: “By putting bobbies before buildings we have been able to raise hundreds of millions to reinvest in frontline policing and keep police numbers high. This new building is close to its founding Whitehall home and will provide a smaller and more accessible headquarters for the Met.”

The new HQ building has been designed by world renowned architects AHMM and engineered by Arup, following a RIBA design competition to find the most suitable and financially viable proposal for the building. It is being built by contractors BAM.

BAM Construction Managing Director, Richard Bailey, said: “The adaptation of this historic building into the headquarters of the Metropolitan Police Service is a challenging but hugely exciting project. We are delighted with the progress made, given the complexities involved with such a unique building. It is a real privilege to be involved with the creation of something so significant to the capital.”

With the sale of New Scotland Yard, 60 underutilised sites worth around £664m have now been sold. This alone is delivering around £28m worth of savings in running costs and maintenance. Further sales over the coming financial year are expected to bring total receipts from the sale of buildings up to around £900m. The new funds are helping us to transform the Met to meet the demands of policing a global city in the 21st century, by keeping officer numbers high, a more streamlined back-office support, and the latest technology for a strong, effective and efficient frontline service.