05 April, 2017 “No longer a relic of another time but a testament to our own.”   Main construction works begin on the £26m restoration of the East Wing at Alexandra Palace. The Victorian Theatre, hidden for more than 80 years, will be brought 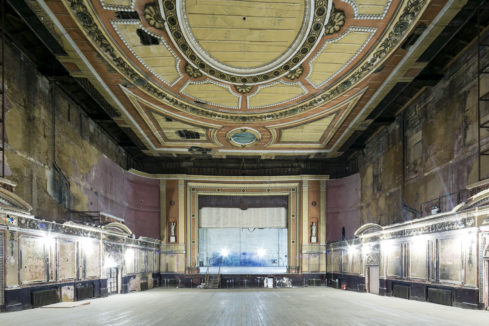 “No longer a relic of another time but a testament to our own.”

Main construction works begin on the £26m restoration of the East Wing at Alexandra Palace.

The Victorian Theatre, hidden for more than 80 years, will be brought back to life with a capacity of up to 1,300 people.

The restored East Court will be a vast, inspiring public space that will showcase the amazing history of the Palace and honour the Trust’s mission to maintain the Park and Palace as a place of public resort and recreation.

The original BBC television studios will be re-envisioned as a dynamic media platform, telling a technology story past, present and future.

The once-in-a-lifetime project to restore Alexandra Palace to its rightful place as a major cultural and heritage asset has started in earnest as the main construction phase of East Wing restoration is now underway.

This comes after the board of Alexandra Park and Palace approved the award of the main construction contract to Willmott Dixon.

Already one of London’s biggest independent event venues and one of its most beautiful parks, with spectacular views across the city, by the end of next year the £26.7m restoration project will allow Alexandra Palace to fulfil its true potential and original mission to be a place of public resort, recreation, arts and culture.

The creation of a brand new public space in the East Court with a stunning glazed roof and a flexible learning and participation space at its core will welcome visitors and tell the Palace’s story through exhibitions from its own and partner archives. It will grant visitors access to a treasure trove of historical artefacts for the first time, including photographs and early film, which were thought lost or destroyed. The year-round learning and participation programme will also help visitors of all ages understand and enjoy the Palace’s rich history.

Meanwhile, the hidden Victorian theatre dating back to 1875 is being sensitively restored by heritage specialists arresting decades of decay. From late next year it will host a full programme with theatrical performances, cinema screenings, live comedy, music and corporate entertainment among the ideas backed by leading arts figures. The theatre will accommodate audiences of up to 1,300 but has been designed to suit smaller and more intimate performances too.

Continued work within the historic Television Studios has been taken out of the current project to ensure the overall project is delivered on time and within budget. The re-scoping of the project has received support from the main project funders Heritage Lottery Fund and Haringey Council. The Alexandra Park and Palace restoration project team are now working with the BBC and other partners to finalise the new scope for the television studios project. It will be an interactive celebration of the proud history of broadcasting and the BBC at Alexandra Palace as well an exploration of cutting edge broadcasting and technology.

Alongside the funding from Heritage Lottery Fund and Haringey Council, Alexandra Palace is building partnerships with world class organisations and inviting supporters to help realise the full potential of this project. From in kind support to naming rights and partnering with the learning and participation programme, there is a huge range of opportunities to get involved. Individuals can name a seat in theatre, and every donation over £25 will be credited on the donor board in the restored East Court – visit www.support.alexandrapalace.com.

Louise Stewart, Chief Executive of Alexandra Park & Palace Charitable Trust, said: “The public have waited so long to see this spectacular place, set high on the hill above North London, brought back to its original splendour and glory. It’s unbelievably exciting to know that by next year we will have made such a big step forward.

“The Palace has always been bold and even radical in its activities. In 1898 it hosted a replica of the Pyramids of Cairo and a recreation of the last days of Pompeii in the form of a firework spectacular. It was intended as a place where people could relax away from the rush of the city and still enjoy world-class culture and entertainment.”

Cllr Joanna Christophides, Chair of Alexandra Park and Palace Charitable Trust, said: “For the first time in decades, we are able to say with certainty that Alexandra Palace’s future will be as glorious as its past. No longer a relic of another time but a testament to our own.

“The Board is extremely grateful for the support of the Heritage Lottery Fund and Haringey Council. Without them and without the hard work and vision of the team here, Alexandra Park and Palace would fall into a state of irreversible decline.”

Robert Seatter, Head of BBC History, said: “Alexandra Palace is known globally as the birthplace of television and was the home of the BBC when it started broadcasting TV in 1936. Eighty years later we should be harnessing that impulse to innovate in order to inspire a whole new generation of future innovators and creative thinkers.”

The Mayor of London, Sadiq Khan, said: “There is nowhere in London quite like Alexandra Palace. As well as being an architectural gem, surrounded by amazing parkland and spectacular views, it has an incredible tale to tell.

“Known as the birthplace of broadcast television, Ally Pally has survived two fires and has hosted a huge range of events for Londoners over the years, from Victorian theatre to the Brit Awards. This ambitious restoration project will take the Palace’s story even further, breathing new life into one of the capital’s most treasured cultural venues.”

Haringey Council Leader, Cllr Claire Kober, said: “It is hugely exciting that construction work is now underway at Ally Pally’s east wing. We know how strongly local people feel about Ally Pally and how keen they are to see the landmark improved and preserved for future generations to enjoy. We share that enthusiasm and look forward to seeing the restoration of the building and park unfold.”